So you want to buy a second hand Renault ZOE but perhaps you don’t quite know where to start. Maybe you are requiring some additional information about the Renault brand and the ZOE model itself. Well, you have surely come to the right place.

The History Of Renault

Renault has been a big player in the automobile industry since the 1800s. First founded in 1899 by brothers Louis, Marcel and Fernand Renault.

The company has faced its fair share of knock backs and tribulations over the last two centuries. However Renault has always shone through and come out the other side even stronger.

Facing two world wars, Renault was resilient and innovative manufacturing tanks for the allies. Though received a welcoming gift from the British Royal Air Force who dropped bombs on the Renault plant, which caused extensive damage. Despite this, Renault built themselves back up and under the new leadership of Pierre Lefaucheux, Renault released some incredible cars to the market. One of those such success stories for the brand was the 4CV, a rival to the Morris Minor and VW Beatle. Another success for Renault was the 5 model.

Now fast forward to the noughties and Renault is well-known for releasing some of the first electric vehicles to the market. Renault was ahead of major competitors such as Vauxhall, Volkswagen, Citroen, Audi and BMW.

In 2013, Renault was the leader of electric vehicle sales in Europe. This was thanks to their forward thinking EVs such as the Twizy, Kangoo and ZOE.

In 2015 and 2016, the Renault ZOE was the best selling all-electric car. Something Renault were completely enthralled about, and rightly so, as this is a huge achievement for any car manufacturer.

Renault’s company objectives shifted and now the company is focused on introducing zero-emission vehicles. This is all in order to ensure individual mobility against the background of rising oil prices and better environmental protection.

In 2017, Renault won the Best Electric Car category at the Carbuyer Best Cars Awards 2017 by impressing the team of motoring experts with its new Z.E. 40 battery which enables a 250 mile range (NEDC). This is the longest available for a mainstream electric car, together with its high level of standard equipment, driveability and five-door practicality.

Renault’s 100 percent electric ZOE was named ‘Green Car of the Year’ for the second consecutive year at the 2019 FirstCar Awards.

David Motton, Editor of FirstCar, said: “We had no hesitation in making the Renault ZOE our Green Car of the Year for the second year in a row. As a pure EV, the ZOE is about as green as a first car can get. It’s also practical, easy to drive and safe, with a five-star rating from Euro NCAP. People think electric cars are expensive, but a used ZOE is a surprisingly affordable. That’s so important to a first-time car buyer.”

The Renault ZOE was voted ‘Best Small Electric Car’ at the prestigious What Car? awards. A seventh consecutive success for the ZOE in the annual ceremony secured its place as the go-to choice when it comes to small plug-in. 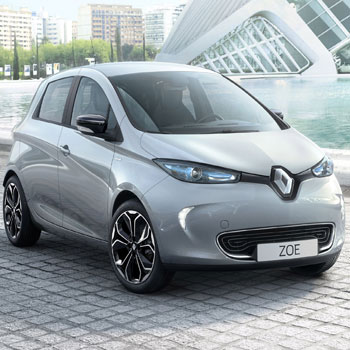 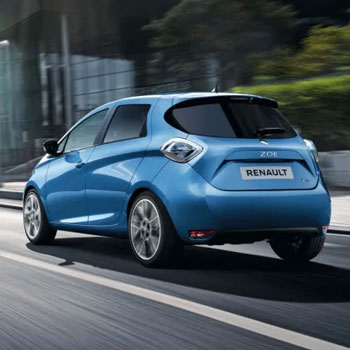 Everything You Need To Know About The Renault ZOE

The interior of the Renault ZOE is very similar to that of a conventional car.  Many EV manufacturers have opted for a futuristic look and feel, especially the likes of Tesla. Renault however have kept their interior design very minimalist. Perhaps this is why Renault has appealed to such a mass audience.

Renault are very well known for their introduction of cards as keys, we have seen this with their Laguna model. The well-known key card has made its way over to the electric world. To start the ZOE, you simply slot in the key card.

The Renault ZOE also has a conventional handbrake, something that is quite out of the ordinary for both electric cars and even modern day ICE cars. As we all know, one usually pushes a button or pulls a tiny lever to engage the handbrake. The fact that Renault has decided to keep a large handbrake in the ZOE again provides a sense of familiarity for drivers who are new to EVs.

When it comes to space, for a small hatchback vehicle there is plenty of room both up front and for the rear passengers. Leg room and head space in the back is quite impressive in the ZOE and there are five seats, as well as five doors in total.

The interior of the ZOE reflects the exterior in that it doesn’t look like it’s futuristic counterparts on the outside either. Rather the ZOE looks like a modern day city or town car.

The wheels come as 15 inch standard on the ZOE and the top of the range models come with some impressive looking alloys.

You don’t get many grooves, vents and nice curves on the ZOE, in fact the exterior does look a bit basic. However, when you consider the price of the ZOE, you can quickly see that the money has been spent on the battery. Renault really has worked hard to provide customers with incredible value. So one kind of has to expect the cut backs on the exterior. Although, saying that we think this gives the ZOE its wonderful charm.

The Renault Zoe E Dynamique EVR 90 gives a very generous range of 160 miles. If this doesn’t impress, then you can always goes for the later model, the Renault ZOE i Play R110 which gives a whopping 210 miles. 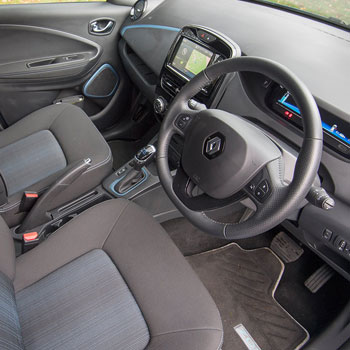 When you buy a second hand Renault ZOE from EV Sales, you will have peace of mind knowing that the vehicle has been purchased directly from Renault with the battery included. Therefore once sold, the new owner will retain those battery rights. Full paperwork will be provided to potential buyers upon enquiring.

When electric vehicles first entered the market, the question surrounding battery life was one of hot topic. Electric vehicle batteries were expected to last on average seven years, however we are seeing batteries lasting beyond this. Now the current prediction is that an electric car battery will last from 10 – 20 years before needing to be replaced.

You’ll be guaranteed to find a car to suit your budget. EV Sales is a used electric car dealership based in Strood, Kent and we are highly recommended. All of our listed electric vehicles were originally bought from new for our sister company, EVision Electric Vehicle Hire. Once the rental vehicles need to be replaced, they are passed onto us to sell.

When you buy electric vehicles from EV Sales you’ll be receiving a vehicle that benefits from the following:

Although we are currently closed to the public, we can however offer virtual tours, and even a click and collect service. We cannot allow any walk-in appointments in line with the current national lockdown.

Contact the EV Sales team today on: 01634 914063 or email: mail@evisionsales.co.uk to book an appointment or get a quote.

Any cookies that may not be particularly necessary for the website to function and is used specifically to collect user personal data via analytics, ads, other embedded contents are termed as non-necessary cookies. It is mandatory to procure user consent prior to running these cookies on your website.