There’s already competition within the EV market, and the pressure is definitely on for car manufacturers. After the recent announcement that new petrol and diesel cars will no longer be produced after 2030, individuals are finding themselves looking more and more into electric vehicles. Is it time to make the switch now?

The big question is should drivers buy a BMW i3 or a Volkswagen ID.3? Here at EV Sales we take a look at two big German brands to find out which is best. Find out the advantages of each EV below.

BMW also known as Bayerische Motoren Werke was originally founded in 1917. Since the beginning, the company started off making aircraft engines, followed by motorcycles and finally automobiles. Today, there are over 133,000 employees across different production sites in 14 different countries.

The BMW group is also known for owning Mini as well as Rolls-Royce. We would all have expected BMW to have at least touched upon the electric market with one of these big names. However, the electric journey didn’t start until 2013 when the highly recognisable BMW i3 was released. The first all-electric car from BMW was also the first car to be mass produced with an exterior made primarily from carbon-fibre.

The next release for the German company was the BMW i8 in 2014, a luxurious and sporty addition to the EV market. The BMW i3 Range Extender (REX) was then produced in 2017, both of which are hybrid vehicles.

Volkswagen coming up against BMW, surely not? It’s safe to say that BMW has achieved a lot in the time it has been operating, but so has Volkswagen.

Volkswagen is another big name currently on the market, and also another big German manufacturer. It was founded in 1937 by German Labour Front and at the request of Adolf Hitler, believe it or not! The company was created in order to produce a car that was speedy yet affordable. Volkswagen also translates as the “people’s car”, so their aim is clear.

Volkswagen has been a big competitor for some time. It wasn’t until September 2015, when the emissions scandal emerged. The manufacturer had to recall over 8.5 million cars as a result of this. Definitely another reason to switch to electric!

Since 2017, the company has proven itself to be a better producer of cars, when they announced that there would be a heavy focus on electric vehicles going forward. Volkswagen have definitely lived up to this promise, and there are still plenty of fantastic new EVs yet to be released!

WHY SHOULD YOU BUY A BMW I3?

Originally released in 2013, we have seen newer models released of the BMW i3. Every model is getting better and better!

Let’s start with the range and battery. Based on a 2020 model, drivers should expect to receive at least 190 miles on a full charge. However this can vary by how the car is driven, plus how many interior features are used on the journey.

The charging time will vary depending on the cable or charging station. AC chargers will take longer in contrast to DC chargers. If you’re out and about the BMW i3 can be charged from 0 – 80% in 40 minutes using a 50kWh charger.

When using a 3 pin charger at home, the BMW i3 can be charged from 0 – 80% in around 3 – 5 hours. Most EV drivers will opt for a charger installation at home, so their vehicle can be charged overnight, or whilst they work from home. How convenient!

Both the BMW i3 and the Volkswagen ID.3 benefit from regenerative braking. Allowing the driver to create additional mileage when the vehicle is slowed down.

So what’s so great about the interior of the BMW i3? This particular EV has clearly been designed from top to bottom with sustainability, exceptional looks, outstanding handling, driving dynamics and battery performance in mind. Drivers can make the most of:

The quirky exterior of the BMW i3 is something that has to be mentioned. It certainly stands out from other current electric vehicles. The exterior elevates the futuristic design that BMW was aiming for.

The BMW is already a serious contender on the EV market, and drivers are always looking for cost effective vehicles such as this one. We can’t wait to see how the BMW brand evolves over the next few years. 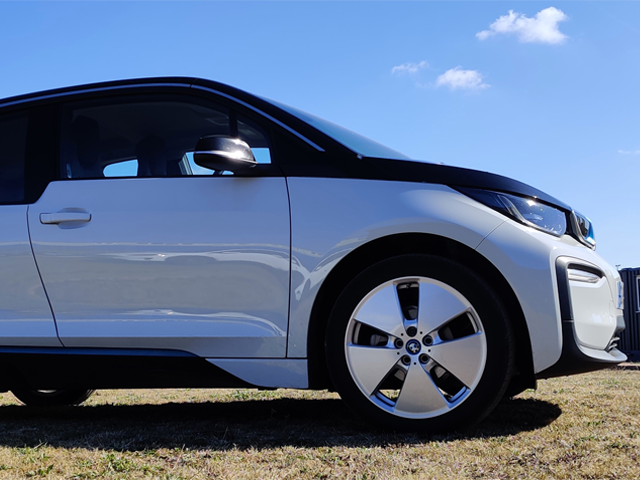 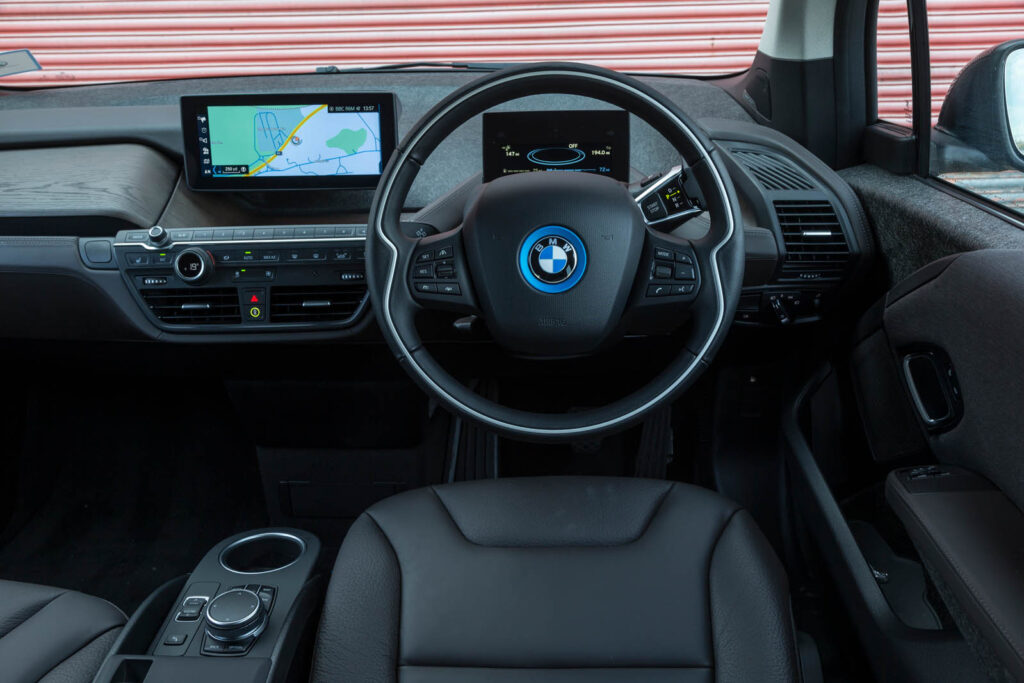 WHY SHOULD YOU BUY A VOLKSWAGEN ID.3?

If you buy a Volkswagen ID.3, you’ll have around 250 miles on a full charge. Which is considerably more in comparison to the BMW i3.

The Volkswagen has a high seating position, meaning that drivers will have a better view of the road ahead. Similar to the BMW i3,

Unlike the BMW i3, the Volkswagen ID.3 has been designed with only 3 physical buttons. The rest of the car functions can be controlled using touchscreen buttons and sliders, as well as the infotainment screen.

The Volkswagen has a high seating position, meaning that drivers will have a better view of the road ahead.

There is ample room for passengers in the front as well as the rear. The VW ID.3 has also been created with plenty of storage space too, making it a perfect family car for road trips.

The Volkswagen ID.3 has a very unique design in relation to the exterior of the car. Visually it may not be to everyone’s taste, but there is a very good reason behind why it has been designed like this. The VW ID.3 has a low coefficient, which is beneficial for a high top speed and low fuel consumption.

Battery technology has come a long way since the first electric cars were created. Drivers can now go further on a single charge, making electric cars a serious alternative.

When charging the Volkswagen ID.3, drivers can get a 0 – 80% in around 30 minutes using a 100kWh charger. Before you know it you’ll be back on the road, and on your way. 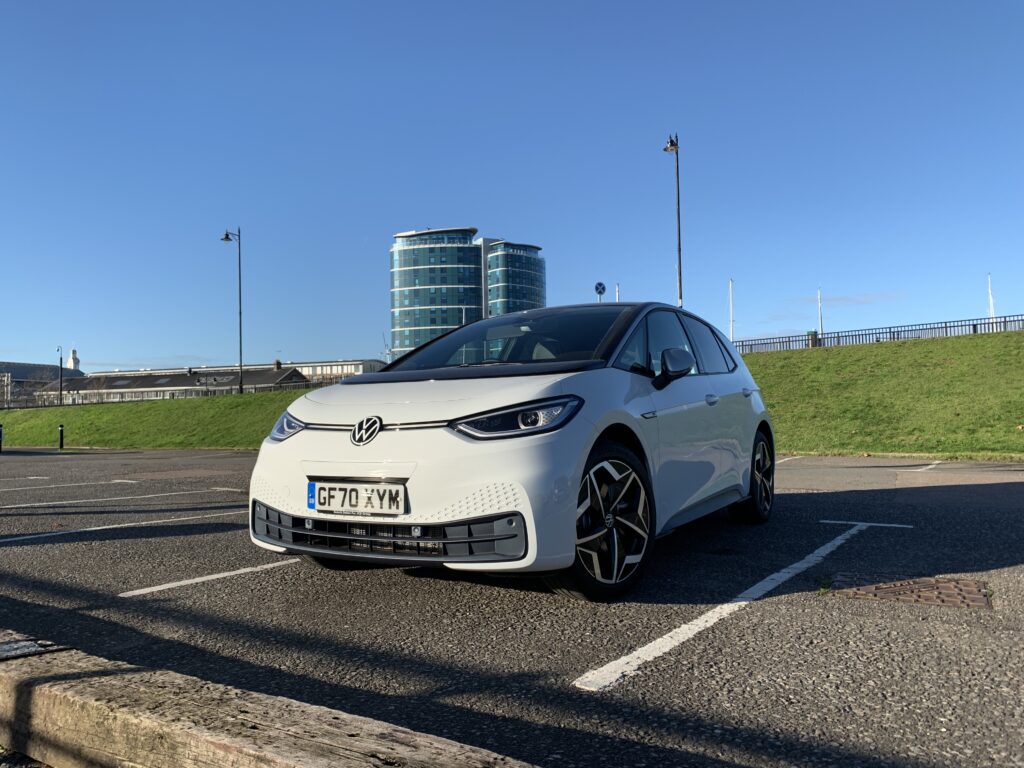 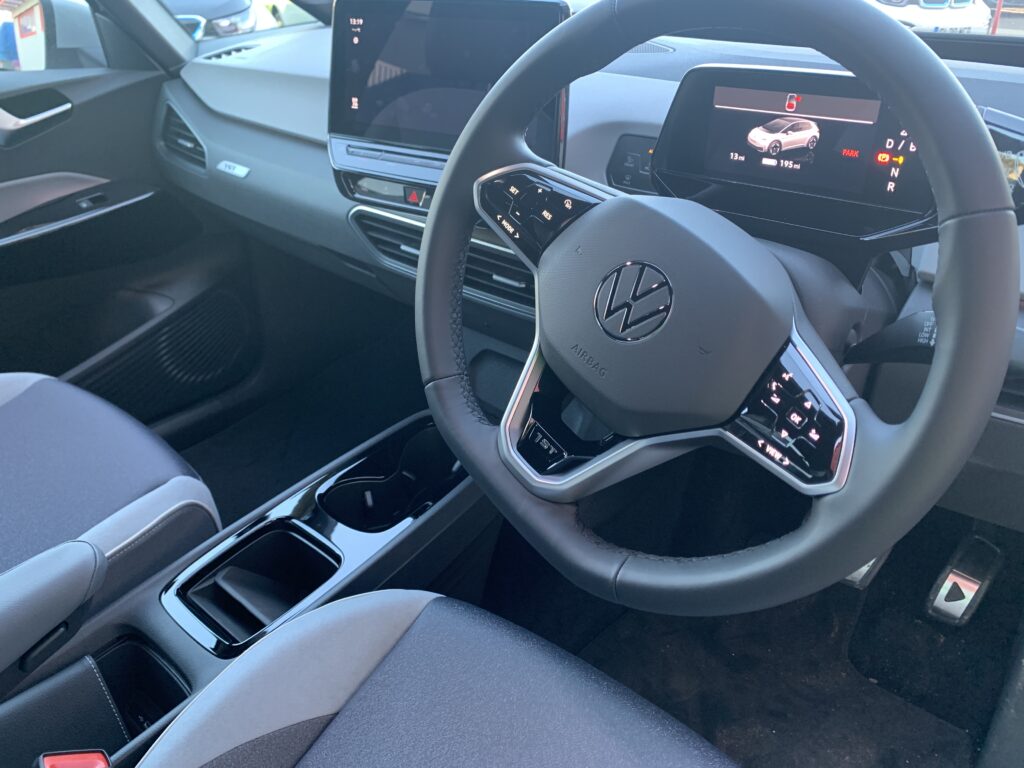 Comparing both the BMW i3 and the Volkswagen ID.3 has been a close call. Both manufacturers have obviously put a lot of thought and detail into the creation of their EVs, and if they are electric then either way it’s a win win!

We wouldn’t want to tell you which one to buy, however we do have options available for you. If you want to buy a BMW i3 then EV Sales can make it happen. On the other hand, we have our connections, and both cars are available to try out for drivers to make up their own mind.

Which EV would you prefer?

EV Sales is a used electric car dealership based in Strood, Kent. If we have swayed your decision and you’re looking to buy a BMW i3, then we will have plenty of second hand EVs to choose from. Not only do we stock the BMW i3, we also offer other popular second hand EVs for sale.

Although we do not currently have a Volkswagen ID.3 for sale, we can definitely agree it is a fantastic EV and a worthy contender if you want to buy an electric car. Luckily, our sister  company EVision Electric Vehicle Hire, has the latest Volkswagen on their hire fleet to try out. With a fleet of over 300 vehicles, drivers can also choose from:

Why should you buy a BMW i3 from EV Sales?

When you buy a BMW i3 or any of our second hand EVs, you’ll benefit from a one month warranty, a car that has only one registered keeper, plus home delivery can also be arranged if needed.

Not decided what electric vehicle you want to buy? Our full stock list can be viewed here. We have plenty of second hand EVs to choose from.

Due to the national lockdown, we are unable to welcome customers to view the cars in person. However, we are happy to arrange a virtual viewing, or even a click and collect service. Feel free to contact a member of the team today for more information.

Any cookies that may not be particularly necessary for the website to function and is used specifically to collect user personal data via analytics, ads, other embedded contents are termed as non-necessary cookies. It is mandatory to procure user consent prior to running these cookies on your website.